On Wednesday, October 6th, 2021 members of Team YC’s Boccia Team, Sean Walker and Sara Steimle, headed to Gardner, Kansas along with YC Staff Chris Garr and Abbie Hair to compete in the National Tournament! They were cheered out of YC’s parking lot by some of the YC Staff. Sean’s mom Mary Ann Walker, and Sara’s sister Maddi Steimle came along for the trip as well.

On the way to Gardner, Kansas the team stayed Wednesday night in St. Louis, Missouri. While they were only there for one night, they didn’t miss a chance to have dinner at St. Louis University with former YC  volunteers and current SLU students Kelley Akin and Grace Kanary! After dinner, Kelley and Grace gave a quick tour of the campus. It is always a good time when Team YC gets to catch up with YC Alumni!

The team was back on the road Thursday morning to finally finish out the drive to Gardner, Kansas. As they got close to Gardner, Abbie, who is from Missouri, took the team on a streetcar tour at the border of Kansas and Missouri. Then, Sara headed to the field house to be classified for the tournament. Boccia athletes play in different classifications. You can read more by clicking here. 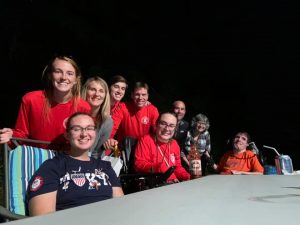 On Thursday evening, after checking in at the field house, Abbie’s family invited the whole YC gang to their backyard for some Kansas City barbecue and s’mores! It was great food, and everyone had an excellent time getting to know Abbie’s family! Abbie’s mom, Cathy, is a teacher and had her class make Sean and Sara cards. Sean and Sara were also gifted snack bags from the Hair family!

On Friday, Team YC headed back to the field house for orientation. After orientation, they headed to an ice cream shop in Overland, Kansas with a special mission. The Golden Scoop’s mission is to provide meaningful employment for individuals with developmental disabilities. It was a place that hit close to home for YC, and we were glad that we could support them! 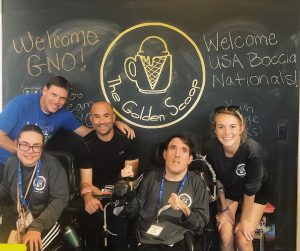 Saturday and Sunday were busy competition days. Sean played three games on Saturday and Sara played five games over the weekend. Sean and Sara both won one game each, played well, grew a lot as players, and learned that they can compete at a high level. We can’t wait to bring more Team YC Boccia athletes next year!

The cherry on top of this amazing weekend was all the support from the YC community! During our follow-along Facebook fundraiser, more than 26 people donated $1,200 to support the trip. Thank you!