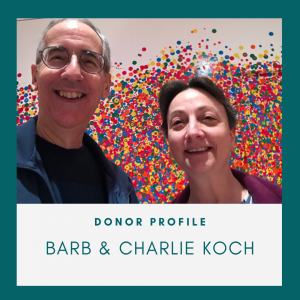 Sometimes, it is simply a casual conversation that can cause a major shift in one’s personal direction and involvement.  As a young financial professional in the early 1980’s, Charlie had such a conversation with then Youth Challenge (YC) Board member, Jim Wooley.  Discussing the organization with Jim, Charlie learned that YC provided sports to children who were physically challenged, and that the organization needed accounting and financial management help to support its growing momentum.  After meeting with YC’s founder, Mary Sue Tanis, and feeling the contagious enthusiasm and smiles as he watched the kids engaged in a program, Charlie was all in. Charlie eagerly shared the mission and activities of YC with his young wife.   She, too, became involved with YC and volunteered her professional accounting services to the organization.

Fast forward almost four decades, and you will still find Charlie and Barb Koch fully immersed in YC, its mission, programs, and future.  Charlie, as the longest-serving trustee at Youth Challenge, has worked in a variety of roles including President, Vice President, and Treasurer as well as on numerous committees.  “For me, giving time and money to an organization as energetic and committed as Youth Challenge is easy,” says Charlie.  “The positive impact [the staff and volunteers] have on the lives of both physically challenged children and the teenage volunteers in Northern Ohio is nothing short of amazing.  How could you not want to be a big part of that once you see the good YC does?”  The positive energy that YC generates and spreads to its committed staff, volunteers, participants, and the broader community keeps Charlie coming back year after year.

Charlie freely admits that Barb is one of the hardest workers at Youth Challenge.  As YC’s volunteer accountant for more than 30 years, employees and vendors rely on Barb to get paid. Her diligence in preparing the financials results in YC’s audited statements each year.  Her tireless dedication in the “backroom” allows others to focus on developing the unique YC programs that inspire self-confidence and enrich lives.

After years of witnessing the delivery of YC’s mission to thousands of participants and countless teenage volunteers, the organization has become a cornerstone in the Koch family.  Both of Charlie and Barb’s children volunteered at YC and the entire Koch Family have become supporters.  When Charlie’s oldest brother passed in 2018, a named endowment fund to YC was established to honor him in a way that is lasting and meaningful.  Barb and Charlie have also included YC in their wills.  YC’s mission renews every year with fresh volunteers and participants; pledging to secure its future is a commitment from the heart that the Kochs continue to support.