It’s been a Team YC takeover this fall!

The 2021 fall calendar has been one filled with many programs, highlighted most notably by team sports. This can only mean two things—lots of practice and new Team YC shirts! Boccia, football, soccer, and sled hockey saw an energetic return to play thanks to all of the support and encouragement from the participants, volunteers, alumni, and many more. 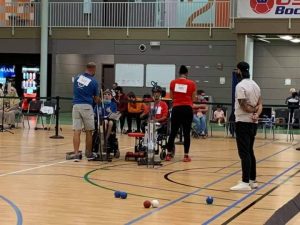 BOCCIA: From midsummer to October, the boccia team put in many hours of practice. Coaches Chris Garr, Sean Walker, Jimmy Abraham, and Abbie Hair, and players Sara Steimle, Bob Vitko, and Will Gallup were all eager to get back in the swing of things. In Columbus, Team YC was able to showcase their skills against tough competition. The team performed well, most notably Sara Steimle and Sean Walker, who placed in the competition and qualified for Nationals in Kansas City. The two were given a hero’s send-off to Nationals, where they fought hard against some of the best competition in the country. The team looks to resume practice and play early next year in Chicago.  Click here for a full report from our trip to Nationals! 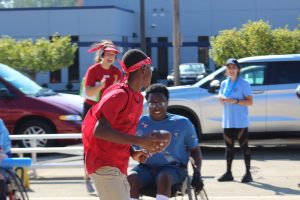 FOOTBALL: Are you ready for some football?! Once a week for five weeks, participants and volunteers gathered on both the west and east sides of Cleveland to fine-tune their skills in preparation for the coveted YC Superbowl Showdown. This isn’t your typical football, rather an adaptive form of wheelchair football. The rules are slightly different from standard American football and accommodate athletes of various abilities. Initially,  it was a challenge to become familiar with the pace of play. Yet, after a couple of practices, participants and volunteers showed much improvement. Quick routes to gain a first down and deep shots down the field for long gains were developed and displayed during the big game. If you like offense, you saw quite the barnburner between the West Side Spooky Western Whales vs the East Side Flying Killer Sharks. With a score of 63 – 56,  the Spooky Western Whales held on late for the win as the Flying Killer Sharks made a valiant comeback.

SOCCER: Speaking of comebacks, what a comeback it was for our soccer team in its third annual match with Empower Sports! Similar to football, participants and volunteers gathered on both the west and east sides of Cleveland for practice once a week for five weeks. With a larger team this year, Coach Abbie Hair was encouraged and excited to get to work. Athleticism, dribbling, and passing were all evident early in the season, yet it was the teamwork that would give Team YC the best shot at coming out on top in the big game. It was a chilly morning at St. Ignatius High School when Team YC took the pitch against Empower Sports. The energy was high, not only from both teams but also from the many families, friends, and fans who came to show support. The game was a high-scoring back and forth bout between two evenly matched teams. Players from both sides were able to control the ball and make smart plays for one another. With goals from Gabby, Jarret, and Deonte, Team YC was able to hold on late in an 11 – 9 victory. 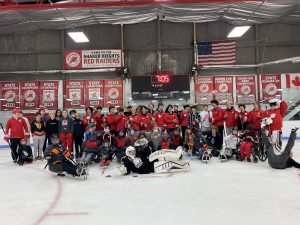 HOCKEY: After a long wait, YC was able to hit the ice once again for sled hockey with Shaker Heights High School Varsity Hockey for the 7th Annual Adapted Ice Breaker. With new gloves, pads, and helmets (purchased with funds raised in 2020 – thank you!), the participants and volunteers took to the ice not only looking the part but also with enthusiasm. In a sport like sled hockey, it can be frustrating to find your balance and keep up with the pace of play, yet the boys from Shaker Heights were not only great supporters but also great competition once the game began. It wasn’t long before goals were being scored! Fun was had by all, and more than $7,000 was raised to support YC and Shaker Heights Varsity Hockey.

Providing an opportunity to play a new sport in an open and fun environment is what YC is all about! GO, TEAM!