On Thursday, June 28th, the Avon Lake High School Boys Soccer Team and participants and volunteers from Youth Challenge joined together to celebrate the Paralympics!

Youth Challenge not only provides adapted sports and recreational opportunities to young people with physical disabilities and their teen volunteer partners but the U.S. Paralympics, a division of the National Olympic Committee, designated YC as Paralympic Sport Cleveland.

Four YC Teams—The Vipers, Betty White Killer Clown Memes, Three Pointers, and Nacho but Fantastic Bears—competed at Avon Lake Memorial Field throughout the day in various Paralympic events including tennis, basketball, track & field, and (of course) soccer.  Each team was led by YC staff members and 2 captains from the ALHS soccer team.  Activities were facilitated by ALHS soccer players who explained rules, kept score, and cheered on YC participants.  Youth Challenge teen volunteers worked hands-on to help each participant adapt each sport and served as friends, mentors, and coaches in the process.  Over 80 children and teens of all abilities were present for the fun-filled day of competition.

“Putting on an event like this was truly special, not only for the participants but for our program as well,” said senior team captain Andrew Jacobson. “Thank you to Youth Challenge for allowing us to host this event. The Avon Lake Shoremen soccer program is proud to have worked with such an outstanding group of people.”

Paralympic Day ended with a soccer match where all 4 YC teams and the Avon Lake High School soccer players took the field to score on each other’s goals.  After all points were totaled, the Three Pointers were announced as the winners and each member received a gold medal prize!

“We were thrilled to have the Shoremen partner with YC,” said Sarah Perez-Stable, Director of Volunteer Services at YC.  “It was great to see these athletes come alive in sharing their love of soccer with our participants and volunteers and we hope to work with the team again soon.” 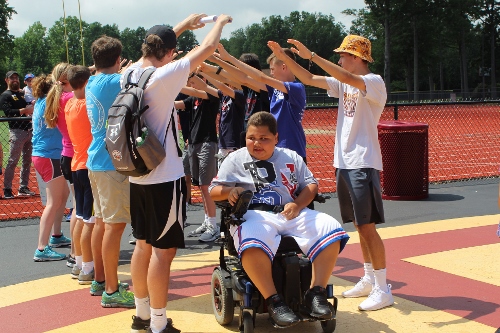 Youth Challenge participants, volunteers and members of the Shoremen Soccer team get ready to compete at Avon Lake Memorial Field for Paralympic Day. 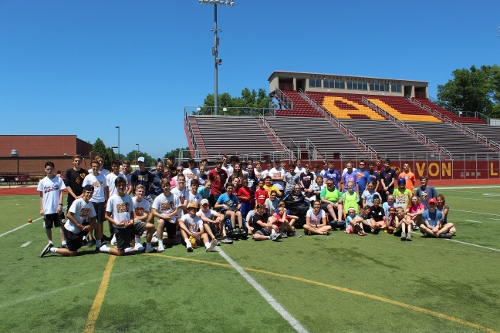 Over 80 children and teens of all abilities were present for the fun-filled day of competition at Paralympic Day at Avon Lake Memorial Field.