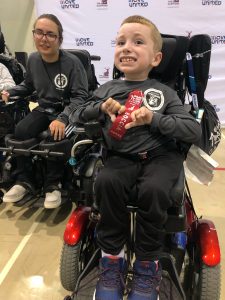 As soon as George hit the ice, the rest was history. Last July, Youth Challenge and Gilmour Academy came together on the ice to launch Gilmour’s new adaptive hockey program. At this event was George, a bright-eyed seven-year-old who had not yet attended a Youth Challenge program. George immediately fell in love with YC – and the feeling was mutual!

For the last couple of months, George has found a home with YC’s Boccia team. Boccia is a Paralympic sport and the adapted form of bocce ball. George is a BC3 (click here to learn more about boccia classifications) player and his dad, Matt, is serving as his sport assistant.  With the help of Coach Sean Walker and fellow players, George has learned very quickly and enjoys the sport! George won second place for his classification (BC3) at the Great Lakes Adapted Sports Association (GLASA) Games in Chicago, losing only to his Team YC coach, Sean.

“It was my hardest match of the day,” Sean said.

In the fall, George became a regular at YC programs including football! George’s excellent playing lead his team, the Spooky Western Whales, to victory and earned him the title of MVP as his adoring family cheered from the bleachers.

This spring, George found even more programs to love at Youth Challenge. In April, George hit the ice with us again during Sled Hockey at North Olmsted Recreation Center. Jimmy Abraham, YC’s Program & Athletics Coordinator shared that George “loves being a hockey player and falling on the ice.” Don’t worry, he wears a helmet!

Youth Challenge is grateful to have George as an active and bright participant. Since we met him less than a year ago, George has become such an integral part of Youth Challenge and it’s changed him, too. His dad, Matt, shared that “through Youth Challenge, George has learned to be a good teammate, practiced good sportsmanship, and has shown off his personality. For a kid like George who loves sports, but has physical challenges, Youth Challenge has given George the opportunity to compete in sports that we never thought he would be able to play.”