Upon Retirement, Beloved YC Founder Mary Sue Tanis Reflects on the Little Nonprofit That Could 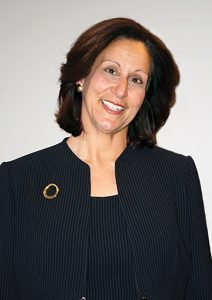 The life-changing nature of Youth Challenge is hard to explain. In our recent interview, YC founder Mary Sue Tanis, who is retiring after 44 years leading the nonprofit organization, reflected on the unlikely alchemy that led to its creation and still fuels it today.

In the early 1970s, Mary Sue majored in recreational therapy at the University of Colorado. She also loved swimming and often shared a pool lane with Greg, a Vietnam veteran who had arms but no legs. When one of Mary Sue’s professors asked her if she would like to assist people like Greg, she said yes in part because her brother had also recently served in Vietnam: “I just pictured that Greg could have been my big brother.” 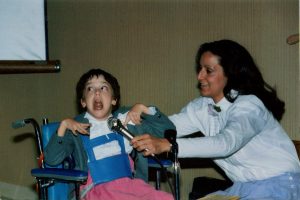 Upon returning to Cleveland, Mary Sue noticed a Fairview Women’s Club swim program that included children with disabilities. She called the woman in charge to join and quickly learned “it was nothing but fun.” So in 1976, through a combination of her tenacity, resourcefulness, and vision, Mary Sue spearheaded her own program through the Fairview Park Recreation Department.

Remarkably, Mary Sue went door-to-door on foot and on bike in her parents’ community to find participants and volunteers! Soon the recruits started meeting twice a week in the local park. Mary Sue noted: “I used to train teen volunteers in my parents’ basement in the beginning . . . we were very much like the little engine that could.” She laughed when recalling that some neighbors questioned the project (and her can-do attitude).

By 1983, Mary Sue’s little-nonprofit-that-could incorporated. It had no vehicles and not much of a headquarters, but that didn’t stop the number of participants, volunteers, supporters, and activities from growing. As she stated, the “kids” kept coming, trying new things, making new friends, and gaining self-confidence. But make no mistake—the work was invigorating but also exhausting. Mary Sue admits that during the first decade, “I had a hard time separating where my life began and Youth Challenge ended.” Gradually, she realized she needed to find capable people who “would own Youth Challenge with me.” 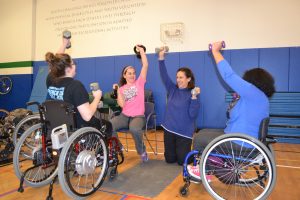 An important side note about the early years of YC involves its absence of a physical building. Apart from avoiding overhead, Mary Sue always wanted to “project” the participants and volunteers into public spaces like parks to raise awareness of disability and access issues. In the process, participants gained social interaction beyond their families and teen volunteers “bridged the gap” with the public by explaining to curious onlookers what they were doing. Mary Sue noted: “We were sowing the seeds of inclusion and we didn’t even know it.”

Over the past few decades, Mary Sue’s desire to find people who “would own Youth Challenge with me” has been fulfilled with abundance. “There’s a saying,” she explained, that “‘we measure success by the ones who come back.’” Today, Youth Challenge is a large family with a beautiful facility and many staff and Board members who were involved at YC in their own youth. Mary Sue beamed with pride when she said “they passed it on and it has multiplied . . . we’re into two to three generations with some families.” For that reason, “the future of Youth Challenge is nothing but bright” and the goal remains the same: “Create that big smile and vibrant atmosphere that makes them want to come back . . . there’s no reason these kids can’t touch the stars.”