It was a beautiful morning on March 5 as teams from the west and east sides descended to The Garrity Center in Berea, Ohio, for the 2022 Crosstown Showdown. Finally, the stage was set; it had been two years since the last shot of madness in 2019 went up. The signs were up, the hoops were up, and the lines were drawn as eight teams of eager participants and volunteers worked so hard to get this moment… and they did not disappoint.

The journey wasn’t easy. These teams had to learn new rules and styles of playing basketball for YC. Teams had to adapt to the defensive 3-second box, adapt to new traveling violations, adapt to volunteers playing in a basketball wheelchair. But, with the help of their coaches, the teams made significant progress, and it showed on the big day. 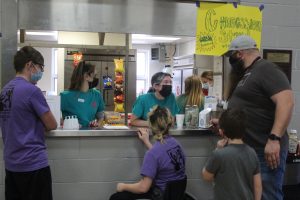 There was no shortage of close games and overtimes. Game after game, the action was almost as non-stop as the concession stand fundraiser managed by the YC Volunteer Committee. The crowd in attendance and those who watched the stream got quite a final game! The two top seeds from the West, the Pink Panthers, and the Tryin’ Lions, met in the championship game in front of a packed gym. The Panthers took a 4 – 0 lead into halftime. But in the second half, the Tryin’ Lions made a run and went up late with 8 seconds to go, with a score of 8 – 6. The Panthers drew up play, and Deegan sent the game into overtime with a last-second shot to make it 8 – 8. However, in overtime, George and his volunteer Luke were too much for the Panthers to handle. They scored twice to give the Tryin’ Lions the victory of a score of 12 – 10.

The nets were cut down and trophies handed out to the teams. The “I Just Hope Both Teams Have Fun” Bracket winners were the Red Rocket Rollers. In the 3rd place, the Terrifying Tigers. In 2nd place, the Pink Panthers. And your champions of the 2022 Crosstown Showdown, the Tryin’ Lions!