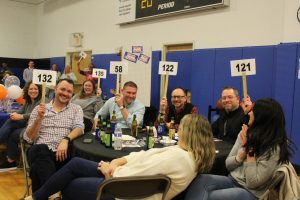 Basketball fans in the Youth Challenge community were eager to gather together IN-PERSON in the YC gym for the first time in two years at Brats, Beer, & Brackets on March 15. Tickets to the event had sold out, and it was a lively occasion with great beer, delicious food, and an exciting auction.

Bob Hale of Benefit Auction Services conducted the auction but tossed it to YC alum and Believeland Media sportscaster Brandon Lewis to share his expertise on each NCAA team. Bidding competition was fierce, and the highest bid came from a YC family– $3,000 for Gonzaga!

Attendees placed bids on which NCAA teams they expected to win March Madness during the live auction, and many entered the All 64 Teams, Sweet 16, and Top 4 50/50 Sideboard raffles in-person and online. In addition, YC supporters bought 42 brackets in the 2022 Youth Challenge Bracket League. In total, $13,223 will be paid out in prize money during the week of April 18 to winners of the auction and raffles.

Event attendees enjoyed bratwurst, sauerkraut, cabbage and spaetzle, cheddar macaroni and cheese and cookies and brownies for dessert from Italian Creations. There was also plenty of popcorn to snack on from YC’s own popcorn machine. Opportunities abounded to mingle at the event, including opportunities to play Jenga, Connect 4 and cornhole in the fitness center.

YC supporters raised over $7,000 during the fund-a-need for adapted kayaks for participants to use.